«Russian-finnish fund for the creation of the Botanical Garden of the perspective plant introduction for the North-West region of the country» («Русско-финский фонд создания Ботанического сада перспективных интродуцентов для Северо-Западного региона страны») applies to legal entities and individuals in the Russian Federation and abroad for sponsorship for its statutory activities.

More details about the planned activities of our Fund can be found in the Concept of the Fund.

Please respond to all not indifferent, loving nature, understanding its importance in the life of every person on Earth!

With Your help our Fund will be able to do a lot of good planned Affairs for preserving and multiplying the plant riches (raisin) in the Northern hemisphere!

In the Leningrad Region the Garden with the Value of One Billion Can Appear.

48 years old enthusiast is totally committed to implement a great idea of creation of a Botanic garden in the area of 120 ha in Kirovsk or Volhov district.

Online.ru got this information about the unusual and difficult for implementing idea from Vladimir Ilyushichev – the founder on “The Russian-Finnish Fund for Creating the Botanic Garden of Promising Introduced Species for Northwestern Region of the Country”. To tell about his idea and draw public attention to it he met with the journalists and students of the Higher School of Printing and Media Technologies of Saint-Petersburg State University of Industrial Technologies and Design (SPb SUITD).

48 years old blind enthusiast badly wounded during the war came to the Leningrad Region from Karelia. He is totally committed to implement a great idea of creation of a Botanic garden in the area of 120 ha in Kirovsk or Volhov district. There is suitable land there – former agricultural area that is now state-owned. Vladimir Ilyushichev is planning to rent the area and create the Botanic garden there. In Petrozavodsk he graduated from the Vacation School of Forestry and Forest Industry with the specialization of technician-technologist in wood sawing and wood processing and worked in the Karelian pulp and paper mill. Later he graduated from the Forest Technical Academy in St. Petersburg.

His interest in conifers started with creation of a small garden near his parents’ house. 110 species of conifers are growing there now. These plants Vladimir has been collecting since 2005.

The collector registered his Foundation for creation of the Botanic garden in February 2015. The search for suitable land continued for two years. Finally, the area in about 120 km to the East from St. Petersburg was found. Vladimir Ilyushichev refuses to give the exact place of occurrence of the future Botanical garden in the Leningrad Region. A man fears a large number of applicants to occupy vacant land. We only know that the area is either in the Kirovsk or in the Volkhov districts of Leningrad Region. Estimated sponsorship funding required is RUR 506 million, i.e. more than half a billion rubles. According to the collector the whole budget had been calculated carefully.

“60 ha will be covered with the Botanic garden which core will be formed with my collection. In addition my friends-collectors from all over the country will donate their alive exhibits. We’ll form a rich collection very quickly. Other Botanic gardens will envy us. 10 ha will be used for the nursery to grow decorative conifer species. The rest of the area will be covered with the park and lawns suitable for arranging landscape festivals. In that way our Botanic garden will be able to host a set of interesting landscape projects. In the future it will become attractive for tourists. We are also planning to create an orchard.” – explains Ilyushichev

To implement the idea it is important to meet people, to communicate with them. Vladimir Ilyushichev always needs a companion for each trip. And he finds such people. The collector says that orthodox believers help him most often. One of his first supporters later became a monk in Valaam. By the way initially Vladimir was planning to place conifers on monastery lands or in the forestry nurseries. But it did not happen. But instead the idea of creation of his Botanic garden became clear. He is now looking for funding to implement it. Actually, the collector had also been involved in charity – he helped an orphanage “The Abode of Mercy” in Plussky district of the Pskov Region.

“In April 2014 we came to the orphanage with my friends. It was necessary to plant a green wall of plants along the fence. I put aside all my projects and was collecting money for buying trees during one and a half year. Later in Tikhvin nursery we bought 41 mountain pine trees, then 30 green and blue Engelman spruce trees. A year later we bought 30 abies.” – recalls Vladimir.

By the end of the meeting with the students going to be PR-specialists and journalists the initiator of the Botanic garden project asked them to spread information as wide as possible in as many sources as possible to collect necessary half a million RUR from all over the world. The students and teaches promised to support the initiative of the enthusiast from the Leningrad Region as the theme of fundraising, i.e. attracting money and charities in the field of environmental projects is of great interest for them from the professional viewpoint.

"Russian-finnish fund for the creation of the Botanical Garden of the perspective plant introduction for the North-West region of the country" looking for like-minded people to implement a unique project for Russia - creation of a colossal botanical garden with an area of 60 hectares in an ecologically clean area of the Leningrad Region, more than half of which will be occupied by coniferous species of trees and shrubs. 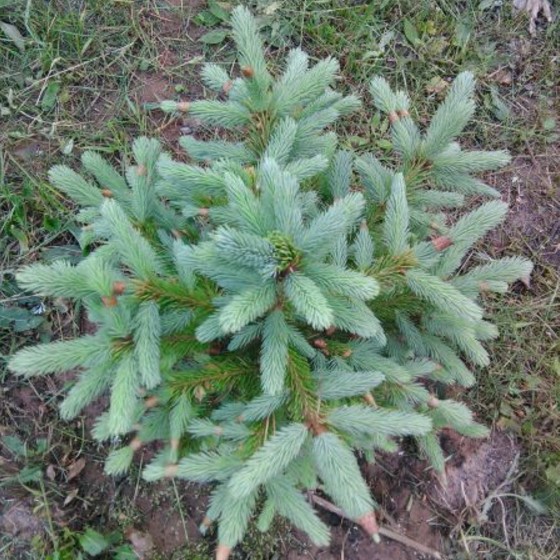 Foudner and president of the fund - member of the Russian Botanical Society Vladimir Valeryevich Ilyushichev, familiar to readers of nature magazines under the "talking" pseudonym Vladimir Kedrov. He has been сollecting coniferous plants in its small area in the village of Selivanovo, Volkhov district of the Leningrad region since 2004. Ten years ago Vladimir Valeryevich has lost his sight, but that not stop him on his way to the dream.

In 2013, the botanist-enthusiast became the winner of the sixth international festival of landscape and garden art "Imperial Gardens of Russia" for the project "Botanical Garden for the Blind".

Today on several ar grow around 110 species of coniferous trees and shrubs from all over the world. The successful growth of many of them in the difficult climatic conditions of the Northwest of Russia, outside the natural range, can be called a real miracle. This carefully selected home nursery will become the core of the future unique botanical garden. The primary goal of the "Foundation for the creation of the Botanical Garden" is the legalization of 120 hectares of land in the Leningrad region, not more than 100 kilometers from St. Petersburg, appropriate to all criteria according to the concept of the author of the project.

For two years lasted the search for a suitable site, and, finally, an optimal plot of land was found - the former agricultural land in the east of the region, which are now in state ownership. However, in order to take a site in a long-term lease, the fund requires considerable funds. However, as in all other areas of the statutory activities, such as the establishment of grafting plantation, a micro cloning laboratory for plants, a soil laboratory, a 10 hectare nursery, a grass lawn, arable land, a fruit and berry garden, as well as making scientific research, test production, technological, design and survey works. According to calculations of Vladimir Ilyushin, for the successful development of the organization, planned for the next 10 years by phases, it is necessary to accumulate 506 million rubles. All secondary activities, except direct creating of botanical garden, are aimed at obtaining commercial benefits for the work of the garden of introductions, which always will exist on dotations. If the business plan suggested by Vladimir Valerievich and his associates is implemented, then in 10 years the project will become profitable and self-supporting. At the moment, our fund is carrying out a campaign to raise funds from donors, sponsorship and charitable contributions needed to implement this unprecedented project, explains Vladimir Kedrov. It is important to start work on the creation of a botanical garden as soon as possible, otherwise our country, and with it the whole world, can lose an outstanding gene pool of pine cedar Siberian, the entire actual area of which is located only in Russia. That mean, our country is fully responsible for its preservation. Under the condition of sufficient financial support, our fund is ready to preserve in the territory of the future cedar park all the genetic diversity of this most valuable coniferous culture at the highest professional level.